Yippee Pie Yay reviewed Breakfast at Westend Pumphouse some months ago and was taken by its well crafted Asian inspired menu. As the day progresses the menu matures and dinner becomes a more grown up affair.

It’s oddly quiet here on a Saturday night. Dining alone I was able to get a table straight away but this also would have been the case if I had brought along 20 friends. The room is large though and would take a lot to fill but it is split up into different sections so as not to be imposing. 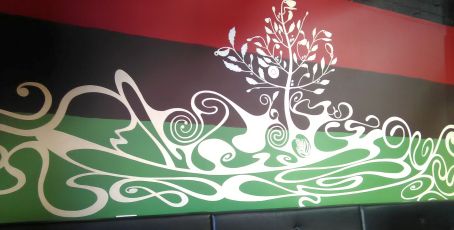 The menu is designed with sharing in mind although luckily for me it isn’t compulsory. Split between small plates and large it features flavours from across South-East Asia.

The Drunken Chicken was light and delicate in flavour with tender pieces of meat swimming in a chilled broth. The tapioca pearls infused with Chinese vinegar and soy were delightful as they exploded in the mouth. $12 for this dish was ridiculously cheap.

As a lover of raw meat I pounced on the Beef Tartar. Mincing it with black beans added another layer of complexity to it as well as hiding the rawness from the eye. This played some tricks with the mind transforming it into something new which while hard to describe was absolutely delicious. The crispy chicken skin was perfect for scooping it up. This was really intelligent bar food.

The Fried Chicken I was warned would be spicy and that the sauce could be found down the bottom of the bowl. This was somewhat odd as it involved eating a piece of uninspiring and under seasoned chicken first to get access to the sauce. Whether intentional or not it had the effect of knocking me out with how this dish was transformed when the two elements were combined. I’m a huge fan of kimchi but had never thought of mixing it with yoghurt and now this is the only thing I want to eat. It worked so very well with the chicken, and the pickles were a great finishing touch. 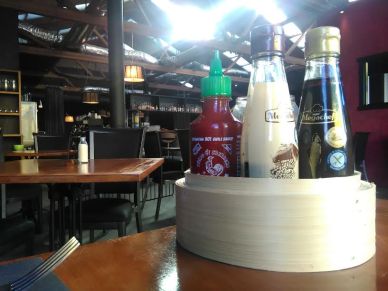 Service was truly excellent, the right amount of relaxed yet professional. Prices are amazing. One small plate might satisfy many, two left me full and three was just me being greedy and wanting more. They’ve a $55 “feed me” option as well that gives tastes from across the menu and also larger plates around the $30-$40 mark. The drinks list is impressive and includes some great Tasmanian wineries and breweries.

I really couldn’t find anything substantial to fault with tonight’s dinner. They’re doing exceptional food in an exceptional space with exceptional service. One of the best and perhaps most under rated dining spots in Hobart.

The Westend Pumphouse is open Tuesday-Saturday from 8am til late with dinner from 5pm. 105 Murray St Hobart.