Ever wanted to order a knuckle sandwich? Well now you can as Hobart’s latest food venture launches this weekend promising pop up events, kitchen take overs and catering with delicious things in bread! Chef Duncan Oliver took time out from busy preparations with his partner Evelyn Mccormack to give us some insight in to what to expect.

Where did the idea for Knuckle Sandwich come from? What has that evolved in to?

I’ve always had an obsession with the USA and after several trips there over the last 5 years the idea went from a New Orleans Po boy business to so many other different ideas, before settling on Knuckle Sandwich. I’m not aiming to do an American Sandwich business, but after 4 trips to the USA (and another one planned in October) I’d say I’m definitely influenced by American cuisine, and American culture! And who doesn’t love a bloody sanga!!

Where do you source your ingredients? Are there any rules when choosing them?

I’m sourcing as local as I can and supporting small local business as much as possible. Meat from M and Js on the eastern shore, bread from Jackman and Mcross, Straight Up and Brighton Bakehouse (I’d love to get to the stage when I can bake my own bread but as I’m only doing pop ups at this stage and borrowing people’s kitchens it’s a bit difficult ) and hopefully some herbs from my granny’s garden!!

What is your background in hospitality?

I’ve been working as a chef since 2002, completing my apprenticeship in 2006. Apart from 6 months working in QLD I’ve always cooked in Tassie, and have spent the last 5 years (on and off to accommodate extended holidays In the US, UK and Mexico) at Ginger Brown in South Hobart.

What makes a great sandwich? Which is your favourite one?

A good sandwich can be built around so many different things! Toasted, fresh, white sliced, buns, baguette etc. and of course the fillings can have so many different options. For me, fried and crunchy, salty and cheesy is always a massive winner, but everyone’s different!!

Perfect beverage to enjoy with a sandwich?

if you ain’t drinking icy cold beers with your sanga then something is wrong.

Where to next for Knuckle Sandwich?

Who knows!! I’m going to roll with it and see how things pan out. Going to try and keep popping up around Hobart over the next 6-8 months and reassess in the new year. The pop up idea gives me a great opportunity to have a crack at business and see if people are interested in my product without having to invest a shitload of money, and also get my head around the business side of things. I’m hoping its onto bigger and better things but I’m also wary that hospitality is a bloody hard business to get into and do well. Hopefully I have more of an idea after Sunday!! 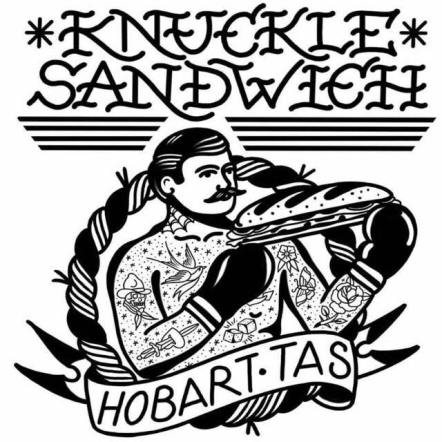 Knuckle Sandwich launches at Shambles Brewery in Elizabeth Street alongside their fantastic beers Sunday the 21st of August from 12:30 til 4pm. After that keep an eye on their Facebook Page for where they are popping up next!